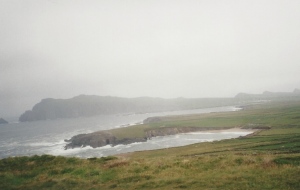 Summer is only a month old, and I’m sick of it already.   Well, technically it’s only a month old.   Here in Florida summer starts in April and lasts until December, so basically by mid-July we’ve had three months of heat already.   Additionally we’ve had mosquitoes, humidity, and thunderstorms.   Thankfully the tropics have been somewhat quiet, so we haven’t had to endure the ritual hurricane hysteria that grips the populace and newscasters when a storm draws near.

As much as I love my native Florida, I’ve come to believe that my Celtic blood was never meant to live in this tropical paradise.   Luckily I am one of the dark Irish, so I’m not as sensitive to the sun as my fair-haired, light-eyed family.   I also have the sense to stay inside during the worst part of the day or cover up and smear myself with sunscreen if I do venture out.   But I’ve always hated the heat.   Even as a child, my favorite days were when cold fronts blasted down the peninsula.   Puppy-like, I would play outside, running in the refreshing dry air.   Many of my friends shiver when the thermometer dips below 70 degrees, whereas I eagerly look forward to outdoor adventures if 60 is the forecast high.

Flying to Ireland in May 2009, we descended into Dublin as the misty morning fog rose to greet us.   It was so thick you couldn’t see the airport, but the pilot skillfully landed.   We passengers disembarked from the plane on the tarmac and walked into the terminal.   The cool mist that surrounded me as I stepped onto Irish soil was like an embrace welcoming me home.   For two weeks we roamed the Irish countryside.   Some days were sunny, but others were what the Irish called “soft”—cool and drizzling.   Friends traveling with me were chilled, but I was in heaven.   Exploring ancient sites in a misty shroud, you are transported through time.   The present fades away while you imagine all those who stood in those very places eons ago.

I imagine if it was cool, wet, and cloudy most of the time I might get tired of that.   It’s nice to see the sunshine.   But I checked today’s weather report for the beautiful Dingle Peninsula on the west coast of Ireland.   The high temperature was 66 degrees.   South Florida was close to 95 degrees with 60% humidity and a heat index over 100.   Walking outside felt like swimming through a sauna.   It makes me long for those days in Ireland.   I miss the mist. 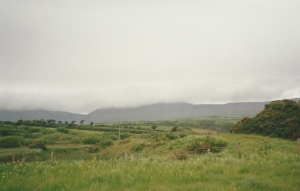 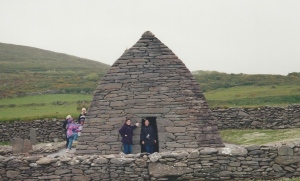 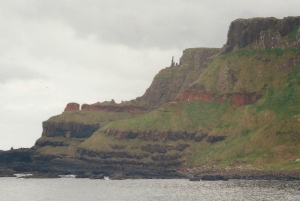