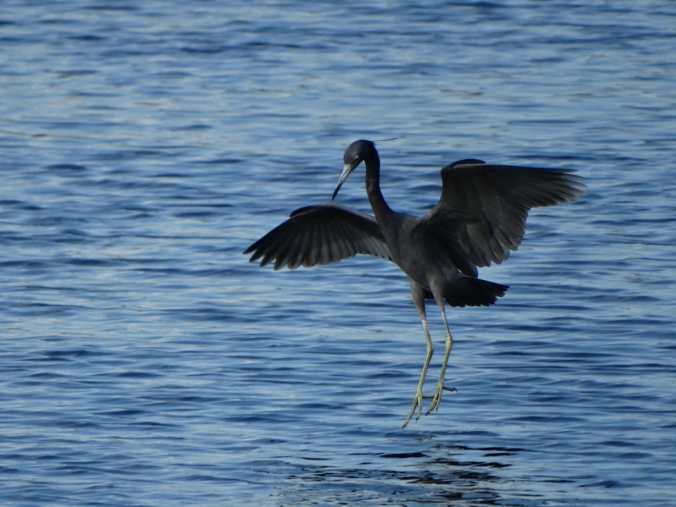 I needed an adventure.   Not a big one, just something fun for a day.   Florida only gets a few pleasant months for exploring before the heat and mosquitoes make my Irish blood miserable, so the clock was ticking.

The Merritt Island National Wildlife Refuge has been on my bucket list for years.  I’ve been to the Kennedy Space Center a few times.   As my husband and daughters marveled at NASA’s engineering feats, I’ve stared off into the swamp and admired the birds and gators.   So we packed a cooler and made the two-hour drive north.

At the visitor center, we walked past tourists taking selfies with an orange tree.    Songbirds darted about the boardwalk, and a pair of ospreys guarded their nest.   Leaving there we drove down a dirt lane that opened up to a vast vista of mangrove swamp and open water.   NASA’s launch pad and Vehicle Assembly Building towered in the distance, a stark reminder that though surrounded by wilderness you weren’t far from modern society.

The Refuge is a bird watcher’s dream.   My daughter grabbed binoculars and checked off species on her list. I grabbed my camera and clicked in every direction.   My husband grabbed his lunch.   Everyone was happy!

Merritt Island spans diverse ecosystems—swamp, pinelands, scrublands, and coast. We viewed alligators, shorebirds, passerines, and birds of prey.   Florida scrub jays greeted us with their raucous screeches, and a bald eagle swooped just over our heads.  An elusive roseate spoonbill tormented me by staying too far away for a decent photograph, but the herons cooperated for the camera.  The Black Point Wildlife Drive—a single lane unpaved trail–is the heart of the Refuge.   It winds through three miles of wetlands filled with herons, egrets, and waterfowl.   But the highlight of our trip was the nest of Great Horned Owls. It was almost dusk when we found them.   Two little fuzzball owlets popped their heads up over the side of the nest while Mama (or Papa) sat nearby.  I was in heaven.

What a perfect adventure.   I needed that day in old Florida–a Florida that existed for eons before the population grew and paved everything around it.   We birdbrains still need the wild spaces. 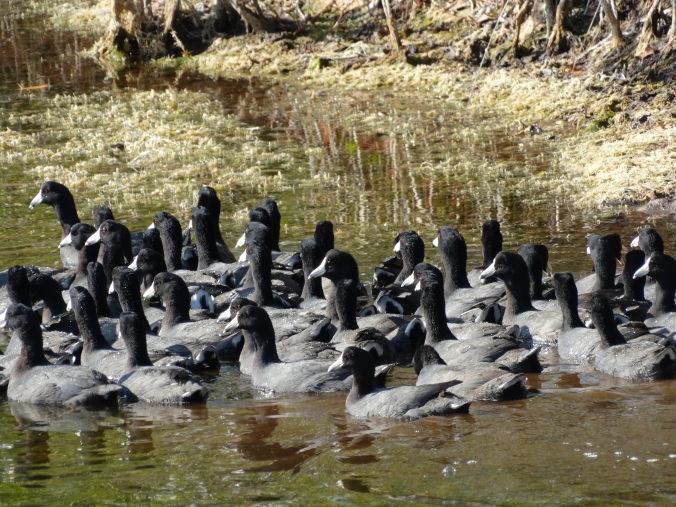 American Bittern–He was so well camouflaged that we almost missed him.  Photo by Tara Powers 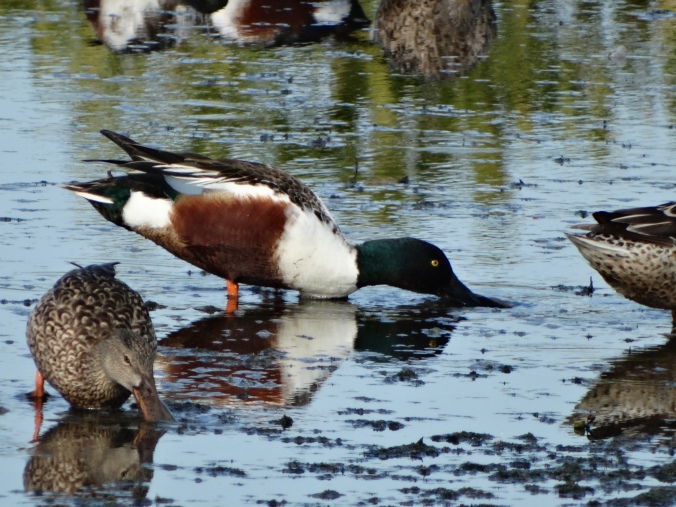 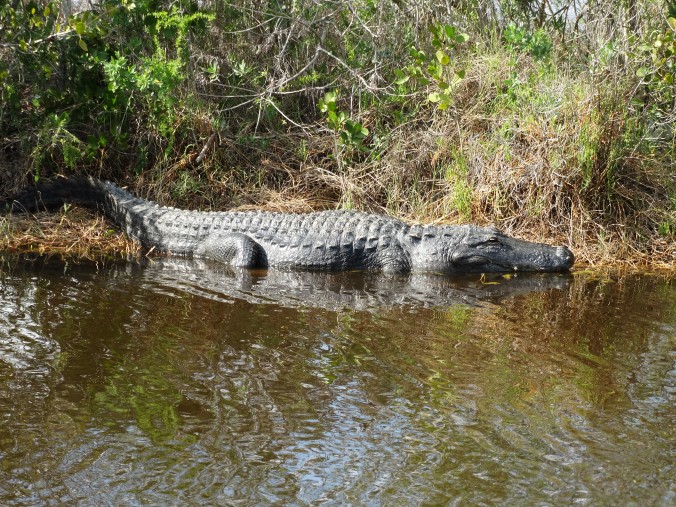 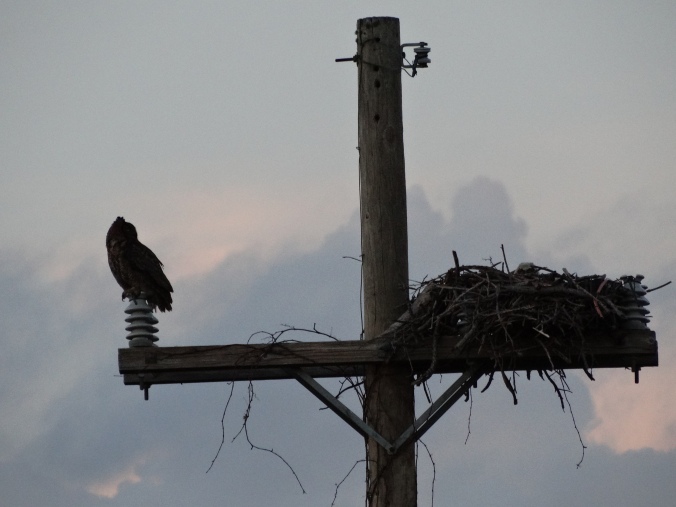 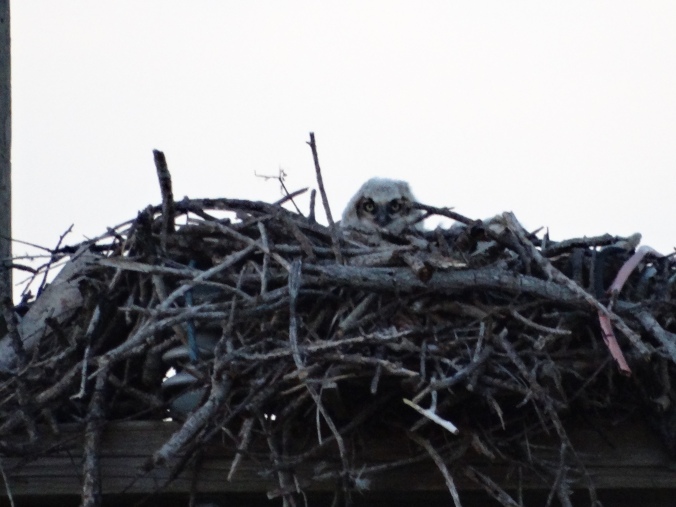 Rat Snake in the Garage

I am a lifelong Floridian, so I am accustomed to sharing my world with you.  We go back a long way.   As a toddler, I tried to teach a green anole lizard to swim.   It didn’t end well, and I apologize.

When I was five we found a corn snake in the back yard.   We kept him in a large coffee can and played with him everyday—until Mom found the empty can in the living room.   We searched all day for “Corny” and finally found him when we couldn’t open the sliding glass door.   He was stretched out in the track.   Mom insisted “Corny” be released, so we bid him farewell and set him free.

I do regret that incident with the rattlesnake.   But you have to concede that it was a dangerous situation.   My friend and I wandered down to the creek, and he was coiled up where all the kids liked to play.   He struck out at us, and we raced home.   Worried about the neighborhood children, Mom called for help and the police removed the threat.   I’m sorry it had to end that way.

But for the most part we have peacefully coexisted.   As a kid I remember alligators roaming the streets during mating season.   I’ve admired rough green snakes, gracefully draped in the mangrove trees as I’ve paddled a canoe underneath them.   Box turtles are adorable, and I’ve helped many gopher tortoises safely cross a busy road.   You lizards have overrun my patio while puffing out your red dewlaps to challenge me to “your” territory.   And I don’t complain when ringneck and brown water snakes insist on swimming in the pool.   I’m not thrilled when I surface and find you in my face, but you have to admit I rescue you and return you to the safety of the backyard.

Recently, however, I’ve noticed some changes around here.   Some odd relatives of yours have arrived, and our encounters are more frequent.   A couple years ago I was shocked to see a large black and orange African Agama lizard at the CVS pharmacy.   I thought some joker had painted an iguana until I looked up your species and learned how colorful you can be.   Now I see your kind all over town.   Then last year I found an invasive neon-green iguana in my White Bird-of-Paradise plant.   But this week you have gone too far.

I was carrying an armful of recycling into my closed garage, and I almost stepped on a large red rat snake.   Now I am not afraid of you, but you startled me.   I don’t expect you inside the house.   And did you really have to leave that disgusting pile of scat at the entrance?   Later that day I saw the beautiful hawk in the backyard.   Racing out with my camera, I barely avoided tripping over “Licorice,” the southern black racer snake who resides in our privet hedge, peering up like a periscope to spy on us.   And yesterday as I was watering plants, something large leaped from the Petrea Vine into the neighbor’s hickory tree—and it wasn’t fluffy with a bushy tail.   Almost invisible, it crept through the branches.   The military should study its camouflage pattern.   After twenty minutes and thirty mosquito bites, I had enough photos for my zookeeper daughter to identify it.   We now have a Cuban Knight Anole, another invasive species, in the yard.

So let’s call a truce.   I will watch my steps more carefully and make a lot of noise so you can slither away quickly.   And you will stay outside and not leave poop on the door step.   We have a long history together.   I know we can work this out. 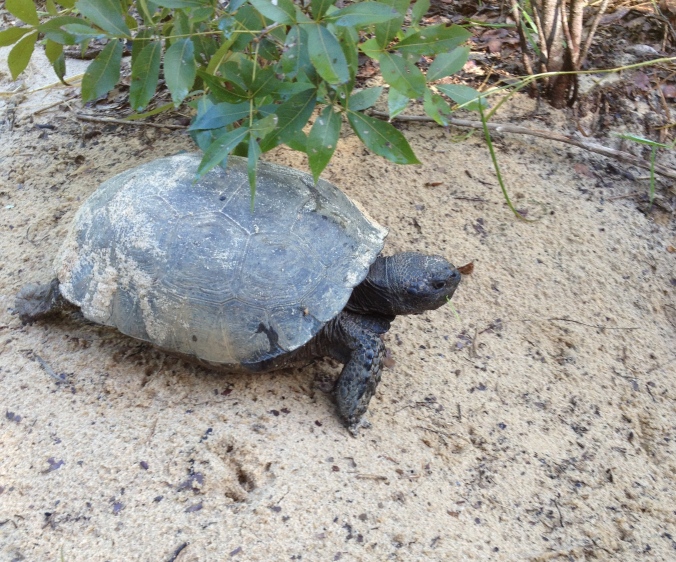 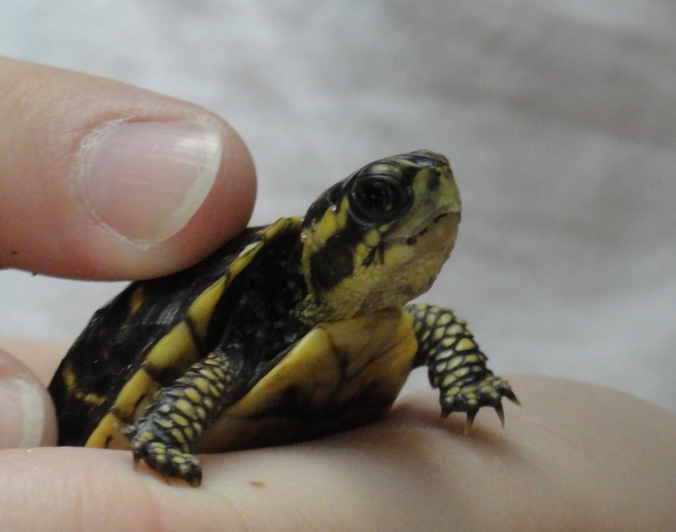 Orphaned baby opossum on his way to the wildlife sanctuary.
Photo by Tara Powers 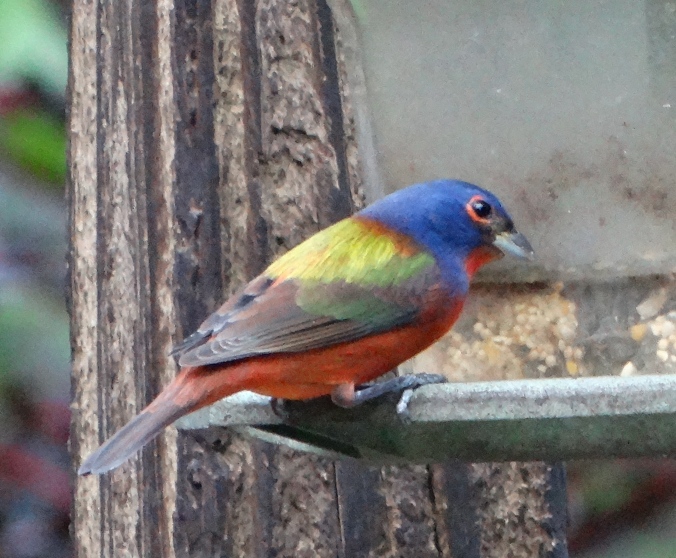 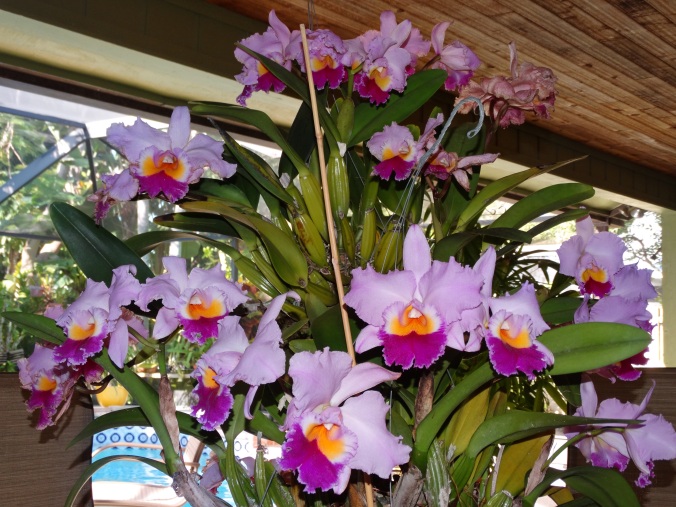 It’s Sprummer!—the season in Florida that follows our two brief months of winter.   If you live here, you understand.

I’ve heard folks from other states opine that Florida does not have seasons.  As a native Floridian I can attest that we actually do.   They are just more subtle than those up north.   We joke that we only have two REAL seasons—Tourist and Hurricane–but observant individuals will notice the changes we experience.

True summer sets in during May.   It gets hot—really hot.   And if a west wind blows across the Everglades, it gets even hotter.   Early in May twenty years ago, I chaperoned a field trip of kindergarteners to Miami’s Metro Zoo.   It was 98 degrees in the shade with a hot wind blowing from the glades.   I can’t remember the animals we saw, but I can recall every water fountain we stopped at.   May can be fickle—nice one day, brutal the next.   But some of our most beautiful trees—like the flame red Royal Poinciana and purple Queen’s Crape-Myrtle—burst into dazzling bloom at this time.   By June the daily afternoon thunderstorms build up, and this pattern lasts through September.   To make things more interesting, this also coincides with the height of hurricane season.

Autumn heralds its arrival with a change in the light.   The sunlight shifts and softens in the house.   Usually by the third week in October we finally get some relief with a mild cool front.   Migrating birds pass through, and our family of painted buntings settles in for the next six months.   It often warms up again for Thanksgiving, just in time to wilt the holiday trees that have sprouted under roadside tents.   By Christmas I am praying for a blast of arctic air, but more often than not I’ll have the air conditioning chugging away as we open gifts and listen to carols.

Finally January brings some beautiful crisp cold air, and my Irish blood is happy.   Some trees, realizing they missed autumn, now change color and drop their leaves.   I enjoy two months of cool weather while listening to tourists complain that they came down here for warmth.   I smile and invite them to return in August.   The backyard is full of wildlife enjoying the bird feeder.   The birdbath is even busier as winter can be dry and parched.   And the golf courses are dotted with the flamingo pink and lime green plumage of the annual snowbirds.

But in March Sprummer sets in. It’s too warm to call it spring.   The patio orchids explode into bloom, and flowering trees decorate the landscape.   Brightly colored butterflies and bees flitter and buzz among the blossoming bougainvillea and petrea vine.   Winter birds journey back north while native ones court, nest, and raise their young.   Yellow crested flycatchers return to the nest box, and catbirds splash in the birdbath with delight.   Bunnies scamper through the yard, a muddy mess from the raccoons digging for grubs and worms.   Meanwhile the house periodically shakes from the squirrels rampaging across the patio screen.   Alligator mating season commences, and they occasionally wander around the neighborhood looking for love.   And baby opossums, turtles, snakes, and lizards appear, delighting (or terrifying) residents working outside.

So enjoy our Florida Sprummer.   It’s warm enough to enjoy the pool and beach, but the humidity is still somewhat tolerable.   That won’t last.   The sunlight will strengthen and shift again as we prepare for the long hot months ahead.   I dread the thought of a hurricane, a constant concern once June arrives.   But on the plus side, traffic is a lot lighter.   And for those tourists seeking warmth—you’ll really enjoy August! 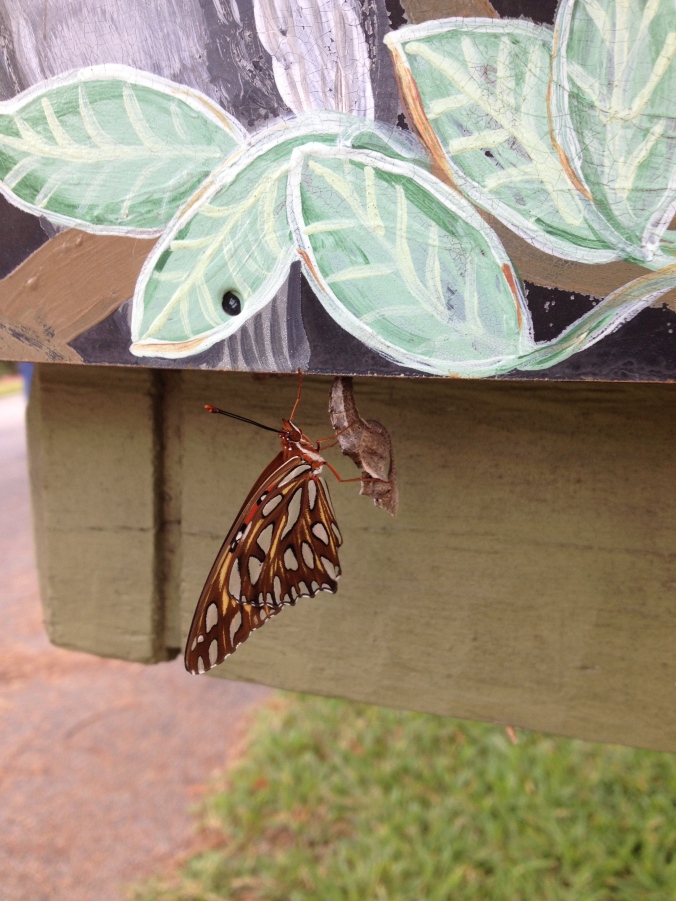 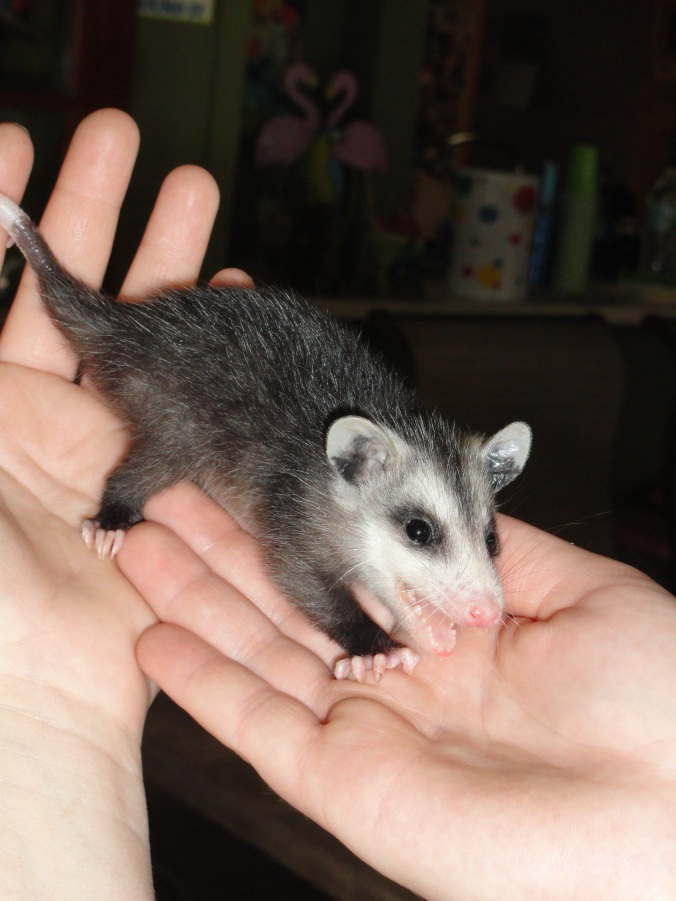 Orphaned adorable baby opossum on his way to the wildlife sanctuary.
Photo by Tara Powers